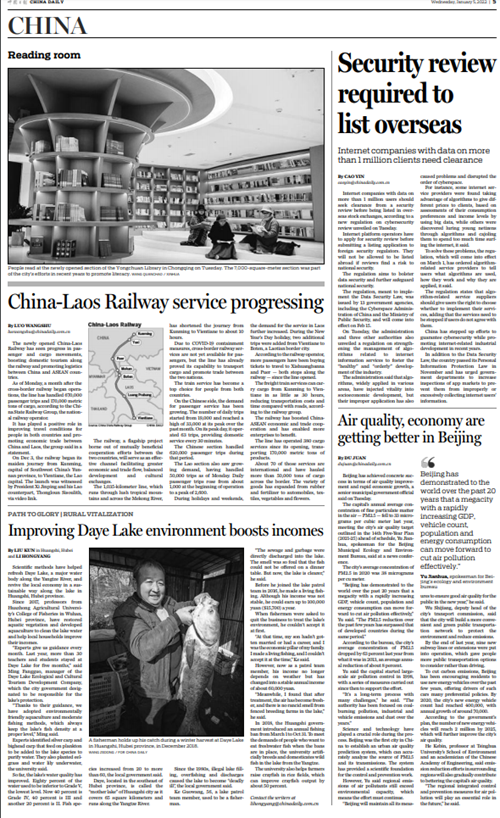 Scientific methods have helped refresh Daye Lake, a major water body along the Yangtze River, and revive the local economy in a sustainable way along the lake in Huangshi, Hubei province.

Since 2017, professors from Huazhong Agricultural University's College of Fisheries in Wuhan, Hubei province, have restored aquatic vegetation and developed aquaculture to clean the lake water and help local households improve their incomes.

"Experts give us guidance every month. Last year, more than 30 teachers and students stayed at Daye Lake for five months," said Ming Fangguo, manager of the Daye Lake Ecological and Cultural Tourism Development Company, which the city government designated to be responsible for the lake's protection.

"Thanks to their guidance, we have adopted environmentally friendly aquaculture and moderate fishing methods, which always keep the lake's fish density at a proper level," Ming said.

Experts identified silver carp and bighead carp that feed on plankton to be added to the lake species to purify water. They also planted eelgrass and water lily underwater, the university said.

So far, the lake's water quality has improved. Eighty percent of the water used to be inferior to Grade V, the lowest level. Now 40 percent is Grade IV, 40 percent is III and another 20 percent is II. Fish species increased from 20 to more than 60, the local government said.

Daye, located in the southeast of Hubei province, is called the "mother lake" of Huangshi city as it covers 65 square kilometers and runs along the Yangtze River.

Since the 1980s, illegal lake filling, overfishing and discharges caused the lake to become "deadly ill", the local government said.

Ke Guowang, 56, a lake patrol team member, used to be a fisherman.

"The sewage and garbage were directly discharged into the lake. The smell was so foul that the fish could not be offered on a dinner table. But now, the lake is clearer," he said.

When fishermen were asked to quit the business to treat the lake's environment, he couldn't accept it at first.

"At that time, my son hadn't gotten married or had a career, and I was the economic pillar of my family. I made a living fishing, and I couldn't accept it at the time," Ke said.

However, now as a patrol team member, his income no longer depends on weather but has changed into a stable annual income of about 60,000 yuan.

"Meanwhile, I found that after treatment, the air has become fresher, and there is no rancid smell from fenced breeding farms in the lake," he said.

In 2018, the Huangshi government introduced an annual fishing ban from March 1 to Oct 31. To meet the demands of people who want to eat freshwater fish when the bans are in place, the university artificially breeds and domesticates wild fish in the lake from the Yangtze.

The university also helps farmers raise crayfish in rice fields, which can improve crayfish output by about 50 percent.(By LIU KUN)